In between changing my address everywhere and fighting with Time Warner Cable about why as an existing customer I don’t qualify for Triple Play, I am mentally redecorating my new apartment. What’s funny is that I think the owner chose me to rent the place the minute I told him that I was an interior designer.  He owns a company that works on high end commercial projects and we have a lot in common.  He has already joked that he thinks that I am going to make it so nice that he’s going to want it back.  I hope he’s joking. Note to self: do not invite him over after it’s finished. I’m still inspired by Tori Mellott’s apartment that was featured in Domino magazine.  While I don’t think I want to paper the walls, I do love the color scheme.  I plan to keep my new apartment neutral with some pops of color such as my blue French chair and patterned pillows.  I also can’t wait to rearrange my art and create a new gallery wall above my sofa.  Packing it up made me realize just how much I own. I’ll have a lot more wall space for art and look forward to creating new compositions.  I still love this Jonathan Adler designed room and might be inspired to hang art lower in my new apartment. I currently have a small wood coffee table but I really want a glass and brass to replace it.  They seem to be harder to find than I thought, at least in my price range, so maybe I push two smaller tables together like Grant K. Gibson.  I keep hearing that Fig trees don’t do well in New York but I definitely want to add some greenery. I’m moving from a long and narrow one bedroom apartment into a wider studio.  In all the years I’ve lived in New York, I’ve never lived in a studio so concealing or at least taking the focus off the bed will be an interesting challenge.  Tori Mellott separated her old studio with an Ikea bookcase.  I’ll have to see if I have room for one after I get everything arranged. Lizzie Baily also separated her living and sleeping areas with a bookcase as seen in Lonny magazine. What I also like is that she skirted her desk.  I have been thinking about doing the same after I move.  I will then be able to hide my printer and files. Lonny editor in chief Michelle Adams also had a skirted desk in one of her old apartment. Grant K. Gibson devoted an entire post to the skirted work table in his apartment.  Since my mother sews, I’m hoping I can talk her into making one for me while I’m visiting next week. Grant hides a lot under his skirted table including a printer on a rolling stand. I’ve already been scoping out bar carts online too.  I love Deborah Needleman’s and hope there is room for one since my kitchen is a little too small for mixing drinks. I already bought a tortoise shell ice bucket that I found at Aero which will look great on a bar cart. Since my kitchen is small and close to the entrance, I will have to decorate it as well.  I have been wanting to mirror a backsplash for a while and this might be the perfect place.  I’ve always loved this one that I saw in House Beautiful. The mirrors definitely expand the space. Here is another mirrored backsplash as seen in Lonny magazine.  I also own those bamboo folding chairs that will come in handy for guests.  Since I barely cook anymore, I want to cover the kitchen floor with a sisal rug. 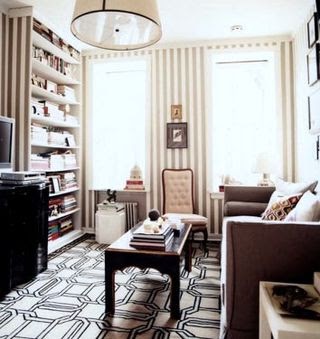 In the other shot of Tori Mellott’s living room, you can see that she has her television sitting on a dresser.  My television armoire served me well for years but I decided it was time to also find a chic dresser for my television. I have a rule of not buying new things for a new apartment until you move your existing pieces.  I’ve gone overboard with excitement before and ended up with too much furniture but I did buy one piece.  I’ve been wanting a marble top dresser for television display and found a fabulous John Widdicomb one online for $250.  I couldn’t even find a new dresser for that price and can’t wait to see it. What sold me on it was the top drawer with separate compartments that will be perfect for jewelry since it locks with a key.  Or I could always organize all my office supplies. The one thing that I will miss about my old apartment in my bedroom.  It was a lovely robin’s egg blue color that that was so relaxing after a crazy day in New York.  I’m hoping that my entire new apartment will now be a relaxing retreat instead.  I can’t wait to get in there to start decorating for real!
Tweet This
Share This
tags
inspiration, moving, new apartment, Uncategorized