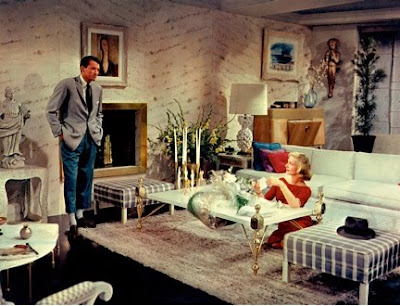 When I was at the Stars of Design dinner recently, I not only sat next to Mario Buatta but also interior designer Geoffrey Bradfield. I had never met him before and found him to be utterly charming and full of life. He mentioned that he just attended a screening of the 1957 film Designing Woman starring Lauren Bacall and Gregory Peck which made him laugh out loud the entire time! Of course I had to check it out and even though Lauren Bacall plays a fashion designer and not an interior designer, it was her apartment that was “very chic” as Gregory Peck declares when he first sees it. This photo, courtesy of Cathy Whitlock and her great blog Cinema Style, is the only one I could find and it doesn’t even do it justice. It was very elegant and full of an interesting mix of pieces and is definitely worth checking out. You might even get a good laugh out of it too!