I love everything that Julian Schnabel’s amazing creativity produces! Plates on a canvas…Genius! Basquiat and The Diving Bell and the Butterfly…Brilliant! Gramercy Park Hotel and a pink palazzo…Stupendous! Alright, you may think I have lost my mind for liking a pink palazzo plopped on top of an old factory and most of New York does too but it’s truly a work of art. As much respect as I have for all the famous architects building now, I’m quite franky tired of big glass boxes. They lack a soul but Julian Schnabel’s new building in the West Village has soul and style to spare. 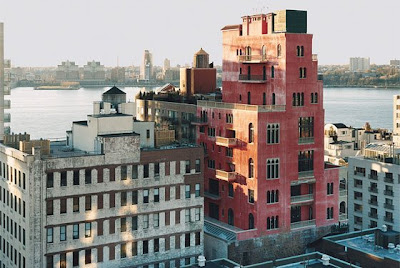 Schnabel says he was influenced by a visit he took to the Scrovegni Chapel in Padua Italy and the Giotto frescoes inside but also by American architects Addison Mizner and Stanford White which is why there are Moorish, Turkish and Venetian motifs throughout. 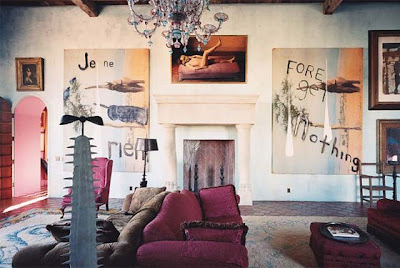 The building houses five residences including his own which is the perfect backdrop for not only Schnabel’s own art but his amazing collection of art by Luigi Ontani, Francis Picabia, Cy Twombly, and Man Ray. 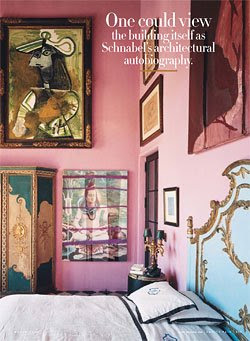 In the bedroom hangs Picasso’s Femme au Chapeau, and I bet we can be assured that the bed is dressed in linens from his Schabel’s wife Olatz‘s own line. She also designs the pajamas that her husband is famous for wearing around town and the building was named Palazzo Chupi after her nickname. 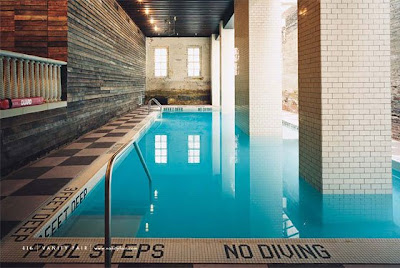 In the basement of the building is the swimming pool, a very rare occurance in New York. It’s fun to go back and look at Schnabel’s designs for the Gramercy Park Hotel after looking at his home because they both have share a similar design aesthetic from the wood beamed ceiling to the black and white floor tiles that are the same in the hotel lobby and in his bedroom. Both the hotel and home also share a strong use of the color red and even the same saw tooth lamp that Schnabel himself designed that here sits in front of Cy Twomby’s Bacchus (Untitled). Schnabel oversaw the placement of all the art including his own painting Teddy Bears Picnic visible through the dramatic red drapes. Julian Schnabel’s Blue Japanese Painting No. 3 hangs in the Jade Bar which not only boasts Jade colored walls but blue velvet seats and more dramtic red drapes. Each room is like a little jewel box and this one also includes a Jean-Michel Basquiat diptych above the salmon colored niche. Schnabel’s Suddenly Last Summer (Picasso Painting No. 2) above the fireplace in the Rose Bar which reminds me a lot of his Palazzo bedroom from the wall color to the “Picasso” painting. One of the most dramatic pieces of art in the hotel is the light installation in the private roof club sitting room that sets off the many Damian Hirst paintings in the room.
It really seems like it’s Julian Schnabel’s finest hour and I really hope he wins the Oscar for Best Director because he really deserves it the award. I also can’t wait to see what this modern renaissance man has up his sleeve next. But I’m also curious what he thinks about his 21 year old son Vito dating 44 year old former model Elle MacPherson!
Tweet This
Share This
tags
julian schnabel, Uncategorized