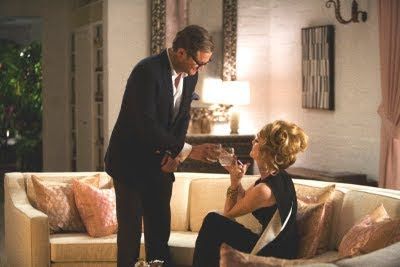 I had a reader email me a few days ago after seeing Tom Ford’s new movie A Single Man asking if I knew where to find the sofa seen in the film. I hadn’t even had a chance to try to find out before the answer came to me! (I love when I don’t have to do any work!) I was chatting with Steven Stolman, the Creative Director of Jack Rogers, when he sent me an image of the sofa from the lobby of his famous apartment building, The Reef, in Palm Beach which has the exact same sofa, or at least one that looks just like it! Steven describes The Reef as “one of Palm Beach’s mid century modern treasures” and it is home to lots of notable people including Simon Doonan and Jonathan Adler, Richard Lambertson and John Truex and Stockard Channing. Above is a photo of the sofa in the lobby designed by Palm Beach interior designer Jack Young. Steven’s apartment in The Reef was featured in the May 2004 issue of Elle Decor and you can see photos of it on the Studio Annetta blog here.

The sofa is the Eero sectional by Rowe Fine Furniture and would be a fun sofa for someone who liked to entertain. I have a feeling that A Single Man is going to bring back the sixties style in decorating and if you want a similar look, you now know where to find it! You can check out Cinema Style‘s blog for more on the film decor too!
Tweet This
Share This
tags
a single man, films, sixies decor, tom ford, Uncategorized