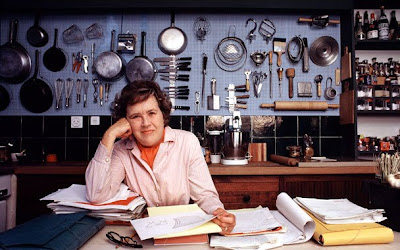 A very sweet article about Julia Child in the new August issue of Vanity Fair inspired me to reread her wonderful book, My Life in France, which she wrote with her grand-nephew Alex Prud’homme. The book is really a love story…the love of her husband, food, cooking and France! It’s also very inspiring. I mentioned before that Julia Child didn’t even start cooking until she was 37 and her first book, Mastering the Art of French Cooking, which she co-authored was published in 1961 when she was 49 years old and her television show, The French Chef, debuted on PBS the following year. She also inspired author Julie Powell to start cooking which she chronicled in her blog that later became a book and movie staring Meryl Streep and Amy Adams which will be released August 7th. I don’t think I’ll be mastering any French cooking any time soon but I can’t wait to pick up some of her cookbooks next and see the film. Julia Child always reminds me that it’s never too late to start something new! Bon Appetit!