I’m sure most everyone has seen the Slim Aarons photo of CZ Guest pictured above but how many of you know the story about the man behind the camera. I posted this photo about a month ago along with a recent photo from H&G that reminded me of the Slim Aarons photo and wondered if the photographer has meant it to look like an Aaron’s photo or if it was just a coincidence.

Well, shortly after I ran that post, I got a comment from none other than Slim Aarons’ daughter, Mary Aarons! How amazing! She mentioned that magazines like to refer it it as “paying homage”. Aren’t they nice? I asked Mary to email me and not only did she email me but she invited me to the upcoming retrospective in New York being organized by Hearst Magazines and Getty Images. She also agreed to a little interview!

All the biography and background information about your father starts with him joining the army at 18 (my dad was born in 1916 and enlisted in 1939. I have his honorable discharge paperwork…and after looking at it recently realized that the dates mean he was 23 (not 18) when he enlisted.) and becoming the official photographer for the US Military Academy at West Point and then a combat photographer. None of this could have happened overnight but yet no story has told how he learned to take photographs. I feel like at that time, photography wasn’t as easy to learn or as inexpensive as it is today with digital cameras. I’m curious if you know the rest of the story and how he learned photography.
My father did not enjoy talking about his early years. He considered the army to be his education and after a pretty sad childhood it was the beginning of the good years for him! Only recently I’ve learned from an elderly relative that when he was a young boy living in the NYC area he used to go to Broadway and wait outside stage doors to take pix of actors and actresses. He would apparently send them the pix and ask for autographs which they’d send back. I’m not sure if this is totally true…but it’s family lore. I know his first camera was a “Brownie”…sort of the precursor to the “Kodak Instamatic”. I will send you the link to an interview that explains a bit more. I do know that while serving in the Army’s press corps he had the opportunity to meet and work with many of the men and women who would go on to become famous photographers and journalists. His years in the Army were his education in photography and his entree to a world beyond NY and New England. 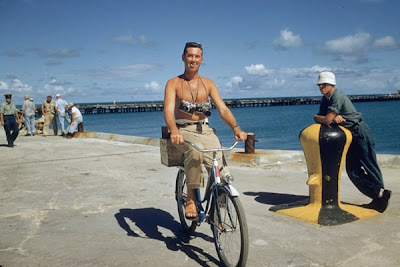 Do you know if any of his war photos have survived or are ever exhibited? I always thought they’d make a wonderful book to benefit Veterans.
Yank Magazine archives and other military archives. Many of them have appeared in various books about the War. Check out the Life Magazine dated 9/21/42 if you’d like to see a very funny article in which my Dad was used as the “model” in a story regarding American servicemen in Britain!

I know he was asked to cover the Korean war and declined. That’s news to me! I don’t blame him. Then he and his friend Bill Mauldin drove out to Hollywood where he started photographing celebrities. The Kings of Hollywood photo of Clark Gable, Van Helfin, Gary Cooper, and James Stewart taken at Romanoff’s in Beverly Hills on New Year’s Eve 1957 is probably one of his most famous photos and is said to be the one that really put him on the map. It’s so appropriate that it’s on the invitation to the retrospective. I’ve heard that perhaps the men were enjoying a joke at your father’s expense. Did he ever explain what they were laughing about or how he came to take that photo?
My Dad had a bit part in a movie starring Sophia Loren and Clark Gable called It Started in Naples which IMDB says was released in 1960. It must have been shot a few years prior. My dad and Clark Gable were in a scene together at the very very end of the movie. My dad’s role was one notch up from “extra” and he plays a loud mouthed American. He was telling the “Kings” of Hollywood the story about the many many “takes” that were necessary. And in fact they ended up dubbing my dad’s voice! What a great story!

I think the best story is how he was asked by Leland Hayward to take photos of apartment buildings in which he thought a writer for Life magazine might live. He took a few shots downtown, midtown and uptown in wide angle, normal and telephoto. He said you could see into one of the apartments that just happened to have been his in the telephoto shot and Alfred Hitchcock liked them and decided to change the character Jimmy Stewart plays in Rear Window from a writer to a photojournalist and based the set on your father’s apartment. Do you ever watch the movie and get a kick out that?
The Leland Hayward part is news to me, although I know he was a friend/colleague. I’ve seen the movie many times (I love Hitchcock!) and indeed the furniture/layout in Jimmy Stewart’s apt is very much like the furniture in my parents’ early apt (I have some pix.) How fabulous! There is also a video on the web that was taken of Slim Aarons after Getty aquired the rights to his photos discussing this story.

Your father shot for Life, Town and Country and Holiday and Travel & Leisure and Venture and a few stories for other magazines here and there, and seemed to travel the globe quite a lot. Did you and your mother ever travel with him? Did you ever get to meet the beautiful people and celebrities he documented?
We both traveled with him a lot…my mom before I was born…the both of us with him a few times, and me several times while in boarding school and college. My mom met lots of exciting people including Marilyn Monroe, JFK, Bette Davis, Henry Fonda and the list goes on. She has some fun stories (putting sunscreen or after tan lotion on Henry Fonda, a holiday dinner with Bette Davis, the offer of a car to borrow from Marilyn Monroe etc.) I was given a bottle of perfume by Roman Polanski and Robert Evans while in Rome when I was a young teen on a story with my dad. I helped the Princess of Lichtenstein (sp?) pick out a dress to wear for a shoot (when my dad rejected her first choice), I met Richard Nixon at Le Cirque one Christmas-time lunch when he came by to say hello to my Dad who he had met years prior. Joan Fontaine recommended Elizabeth Arden skincare lotions and potions to me when we ran into her (a former girlfriend of my father’s) in Vienna while we were there working on a story the weekend of my 21st birthday. I spent one summer doing captions for him in Greece while doing a story on shipping magnates (lots of tough tough names to spell!)…and more!

The most striking thing about your father’s photographs is that they are relaxed and informal. There was no stylist or makeup artist. He prided himself in that! It would infuriate him if someone went to the hairdresser in anticipation of being shot. He wanted natural, unfussy, unposed etc. –and in homes…casual clothes…not formal ones (back to the princess in Lichtenstein mentioned above!) He only (not true) used the natural light (he used cameras with flash/strobes sometimes but not elaborate lighting…I’m not up on my precise camera/lighting terms but he used simple handheld equipment as necessary.) and shot his subjects in their own environments, not a studio or in front of a set. True. I swear everyone in his photos looks more beautiful than models and celebrities shot today and airbrushed to death. Do you ever notice that too? Do you think he ever noticed it? Certainly! Certainly! Photographers and art directors working today often pay “homage” to his work through “imitation” as you’ve noted! As a child he used to take me to museums to look at the work of the masters…i.e. Mona Lisa etc. “It’s all in the eyes”, he would say. He learned about lighting, poses , expression, settings etc. from these great paintings.

I’m sure so many people are thankful that the association with Getty Images has resulted to the release of Once Upon a Time in 2003 and A Place in the Sun in 2005 and now Poolside with Slim Aarons due out in November 2007. Do you know if there will be more books down the line?
There likely will be but I don’t know any details.

What do you think about A Wonderful Life becoming such a collector’s item and selling for thousands of dollars? Was your father aware it was selling for so much?
He loved to have people update him on the going price at Amazon/Alibris etc. He was extremely flattered and amazed!!! He had a few friends with books and he loved to compare “selling prices” with them!

I know this upcoming retrospective must be somewhat bittersweet for you since your father is not here to celebrate with you but it must give you some comfort to know that he really did live a long and wonderful life.
My dad lived a wonderful life and in fact those were his final words to us a few days before he died. About six months before he died Smithsonian magazine did a story on him and he was amazed…to him that meant he’d become an American legend and he was so proud and excited by that. He was very humble and not boastful but for a young “Huck Finn” type kid he knew he’d done pretty darn well! My family and I are looking forward to the retrospective. There are so many pictures no one’s seen for years and years and years…and it will be great seeing them again! The folks at Hearst have worked really hard digging into the archives so that the show will feature lots of these seldom seen pix.

I want to thank Mary Aarons for taking the time to give us the real story behind some of her father’s most famous photographs and clearing up a few of the inaccuracies. It’s such a treat to hear her wonderful stories and get a glimpse of the man behind the wonderful photographs who really did lead a wonderful life!
Tweet This
Share This
tags
photography, slim aarons, Uncategorized